Where are the other ones? But we might start coming up with theories or ideas. When looking at photographs, all we have is what is contained inside their frames, plus, possibly, whatever additional information the captions might provide. When looking at photographs the very first thing is to become aware of what we see — and what we think we see. One of them, the one on the left in the famous frame, is gone.

The baby is still there, and it is more clearly visible now. As before, both mother and child look away from the camera the baby is sleeping.

This photograph is framed differently. Comparing the way these two images were framed is instructive since it tells us something about both photographs.

She supports her children, literally we are led to believe and pictorially they rest their heads on her shoulders. In contrast, while she still is at the center of the second frame, everything seems looser. Two thirds of the frame are occupied by very little — on the left a lamp in the foreground plus a tarp in the background, and on the right a post that holds up the tarp plus an out-of-focus background.

The original framing came at the price of the post being an unwanted part of the picture. This might be the reason why Lange retouched the image, to remove the thumb: The photograph was going to be grounded on the mother, and the mother holding on to something would divert from that photographic device.

She is wearing what might be a wedding band or engagement ring. This is the hand that is not visible in the famous frame. I have no way of knowing whether Lange intended to hint at this or not, but the ring adds a little piece of information about the woman, which, in turn, might trigger additional conclusions.

If there is in fact a man in her life — these children must have a father — where is he? 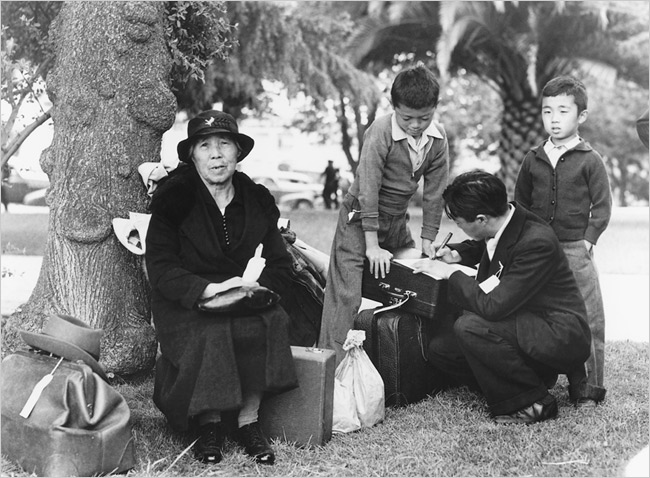 The second frame, on contrast, could be read as a wife who is supporting her children but who also is waiting for her husband or partner to come back, to bring back food or money or whatever else. As before, one needs to be careful about the photographic facts and whatever one might want to infer from that.

Everything else is an assumption. Seven hungry children. Mother aged thirty-two. Father is a native Californian. These people had just sold their tent in order to buy food. That is a lot more information than before. As before, this information gets our minds going, yet we need to be very careful with what conclusions are going to be ours, and which ones are actually supported by the photograph. This third frame is close to the second one in terms of the poses. Very little has changed — the older child is now holding on to the post, and the heads have moved a little, possibly to accommodate the different camera position.

This frame was shot vertically, and it reduces the little family to an even smaller part of the image, still in the very center, though.

There is what looks like a suitcase or trunk in the foreground, somewhat out of focus, upon which a plate rests. There is the lamp again, as are the tarp, the post, the empty backgrounds. Part of the ground is now contained in the frame, in the lower right corner it is in focus: It looks like sand, some sort of soil. The third frame differs quite a bit from the first, famous one. And the group looks almost lost in these desperately poor circumstances — a tent of sorts held up by a post made from a young tree, a single plate, a suitcase or trunk as a table.

Inside the tent, we can see the mother holding the baby , plus two other children, both of them younger than the one in the chair, both probably the children from the other frames. Interestingly, this is the only frame where the subjects are actually engaging with or at least looking at the camera. Most of the posing efforts seem to have been spent on the child in the rocking chair, while the group in the background in the tent essentially just make sure they occupy the correct spot in the frame.

Note how this image is constructed photographically.


The opening of the shelter provides a photographic frame. With this new mission, Lange and Taylor traveled across California, photographing and interviewing the displaced migrants that continued to filter into the state. From to gigantic dust storms had caused severe damage to agricultural lands across the nation, especially in the Great Plains, displacing thousands of farmers and their families who migrated west looking for work. The FSA was created in order to provide relief for the rural poor and impoverished tenant farmers, issuing low interest loans, helping improve soil conditions, and devising programs to help resettle many of the displaced and out of work farmers living in rural areas.

The goal of this project was to show Americans the desperation of farmers across the nation, and why they were deserving of government assistance. Dorothea Lange gave this photograph from Yakima Valley a descriptive caption that gave social context to her work: "Migratory worker in auto camp. Single man, speaks his mind. They oughtn't to do it. It ain't fair in no way.

The government lays them off that is in Work Projects Administration - and they come in because they're locals and take the jobs away from us that never had no forty-four dollars a month. I came out of Pennsylvania, used to be an oil worker. I'm getting along in years now and I seen lots of presidents and lots of systems. Voted for Roosevelt both times and I don't know of any president that ever leaned toward the laboring man like him, but this system they've got here in the fruit is a rotten system the way they work it.

During the Depression, agricultural business was operating on an extremely inadequate system. Large masses of workers were needed for short periods of time, usually at harvest season, but during the rest of the year only a fraction of these workers were able to find jobs. Lange sought to document the effects of this uneven employment system on migrant workers and their families. These vagabond families were denied access to education, medical care, legal services, the postal system, and even the basic right to vote.

After experiencing these conditions Lange and her husband campaigned the FSA to improve the circumstances of these poor farmers. Although Lange and her husband were only somewhat successful in this goal—only two camps were eventually created—her work helped to expose the dire conditions in which these workers were living and stood as public testaments to the humanity and struggles of migrant workers.